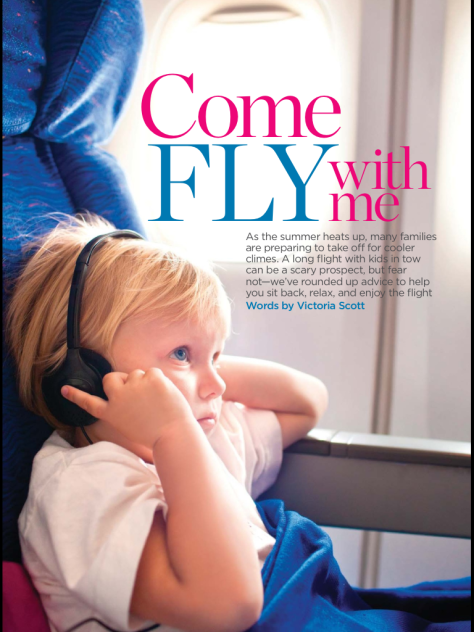 My latest article for Good Housekeeping Middle East has just been published. As the magazine is currently not available online, here’s the text.

Click here to buy a digital copy of the whole magazine.

Come fly with me

As the summer heats up, many families are preparing to take off for cooler climbs.  A long flight with kids in tow can be a scary prospect, but fear not – we’ve rounded up advice to help you sit back, relax, and enjoy the flight.

You might have spotted me at the airport on your travels. I’m the one with a glistening brow, a toddler balancing on my hip, a bulging bag on each shoulder (plus rucksack), and fear in my eyes.

You wouldn’t think that we take at least eight flights a year.  Such a frequent flying family should be pros at this by now, but honestly, we’re still rubbish at it. Just as each month of our son’s development brings a new parenting challenge, what entertained him on our last flight won’t necessarily work now. It’s a lottery, and one we haven’t won so far.

Not that we’re admitting defeat, and neither should you. Knowledge is power, so I’ve consulted travel experts and frequent flyer families to gather together a comprehensive list of tips from those in the know, with the aim of helping your journeys resemble Heaven, rather than Hades.

When I was pregnant, I was advised that children are at their most travel-friendly when they’re less than a year old. I didn’t believe it. The poo! The sick! The screams!  Our first ever flight was indeed a combination of all three, including an epic leaky nappy which destroyed the cream dungarees I’d lovingly dressed him in (such naivety.)

However, with the benefit of hindsight I can also appreciate what those well meaning people were trying to tell me. With some careful planning and packing, travelling with a very little one can be relatively straightforward.

One benefit of flying with an infant is that their ticket is usually free. This does mean, however, that they have to sit on your lap. For some, it’s not worth the cost saving. “Have seats for every child, including babies” advises Barbara Pampel, mother of two, and a veteran of three expat assignments. She also suggests bringing a car seat approved for use on board – but check in advance if your airline allows this.

You should also research what baby-friendly options your airline may offer, according to former Emirates cabin crew member Carrie Bradley, author of blog Flying With a Baby (flyingwithababy.com). “Middle-Eastern airlines generally have great facilities, like free strollers on loan,” she says. “And British Airways and Qantas have some of the industry’s largest bassinets.”

Carrie also advises selecting your seat with care. “Choose seats near the aisle, so you won’t disturb anybody for trips to the changing table” she says. “And if your airline won’t reserve a bassinet for you, check http://www.seatguru.com and find out the exact configuration of your aircraft. You can then request those specific seats. It’s always worth a try.”

When packing, bear in mind that infants usually only qualify for a small checked baggage allowance. However, if your airline will carry a stroller free of charge, Carrie Bradley suggests a clever way to squeeze in a few extra items. “Use a travel bag to protect it, and use the space inside to pack a few light things,” she advises.

All parents I spoke to were unanimous on one point – that you must pack a spare set of clothes – for all of you. “I have learned the hard way,” says Zoe Shephard, who lives in Oman with her husband Joe and two young children.  “My daughter Hannah puked up on me on the way back from Turkey. I was soaked through with sick all the way down to my underwear.”

For those breastfeeding, this phase of travel is pretty straightforward. Parents advise choosing a window seat for privacy, and bringing a breast feeding cover, if your baby is used to one. If you’re bottle feeding, find out in advance if your airline will warm the bottle for you. You can bring pre-filled bottles through airport security, although you may be asked to test the milk.  Feeding on take-off and landing can also help ease the pressure in babies’ ears, and a dummy is also handy for this, if your child uses one.

There were also some humorous titbits shared by parents which I suspect have more than a touch of truth to them. “Champagne and Calpol” recommends Qatar-based mum of two Rachel Matthews, and Tessa Meares, mother of toddler Woody, advises: “Always take ear plugs, so you can’t hear your own child screaming. And then you can also kid yourself that people are only staring at you because you’re looking hot.”

With a few flights under our belt with our little boy, we became pretty smug. He did what infants tend to do a lot – sleep.

Until he turned nine months that is, and we flew overnight to the Seychelles. Our son was crawling, and demanded his freedom. In the inky darkness of a cabin full of slumbering passengers, this was a nightmare. He was like the Duracell bunny, and as dawn broke, we resembled market stall rechargeables – quickly running out of energy (and the will to live.) There’s no doubt that night-time flights work for some, but we had forgotten the biggest caveat of such advice – all children are different.

Even if your toddler sleeps soundly, they will still need entertaining for a portion of the flight.  For some, the novelty of a personal TV may work for lengthy periods, but most will also need bursts of different activities to break the flight into manageable chunks.

Brenda Cowell, mother of twins Ella and Evan, 5, has lived in both Abu Dhabi and Doha. She advises bringing lots of small items which can be given out at different stages of the journey (you could wrap them to create extra excitement, if you wish). Her check list includes: a packet of plasters, a calculator, a deck of cards, pipe cleaners with cheerios (which they can either thread or eat), lollipops, stickers, colouring books and balloons for playing with at the airport.  Qatar based expat Andrea Richardson does similar. “But never take anything which consists of more than two pieces,” she advises. “You end up crawling on your knees looking for bits, apologizing to everybody.”

Snacks are also a vital ingredient for a happy flight. “Work out what snacks to take with you and then double the amount,” suggests mum of two Helen Wade. “Delays and diversions can be made bearable by having enough to feed a hungry child.”

Toddlers need to move around a lot, so consider flying on a larger plane if you can, suggests Dubai based Marianne Makdisi, author of blog Circles In the Sand (dubaiunveiled.wordpress.com).  “The new A380 makes flying with young children a little easier, as there’s more space” she says. “The plane even has a flight of stairs you could use as naughty step, although the first-class passengers might not appreciate the noise!”

Anneliese Bennett recently moved to Qatar from Dubai.  She’s mother to two boys, aged 4 and 2, and she recommends splitting the family’s seats to reduce stress levels. “If I’m travelling with my husband, I try to get two sets of seats behind each other” she says. “This way, my two year old can kick the chair in front to his heart’s content without annoying another passenger.”

If you’re still struggling, you could always turn to the professionals for help. Gulf Air’s Sky Nannies are old hands at entertaining children at 33,000 feet; on its long haul flights, a specially trained cabin crew member is on hand to help those suffering from family flying fatigue.

There’s no doubt that some airlines are more toddler friendly than others. When booking, things to consider include whether you will be able to board first; if the airline offers children’s meals, and if they’re served first; whether you can bring a car seat on board; and whether you are able to pick up your child’s stroller from the aircraft door on arrival. It’s also worth finding out whether the airports you’re flying through have a children’s play area, which are a godsend during lengthy connections and delays.

I’m still waiting for that magic age when my son leaps into his seat, excited about the movies on offer, never to surface except at meal times.

I’m reliably informed this is to come, but it’s still some way off, according to Roxanne Piper-Davis, founder of networking group Doha Mums (www.dohamums.com.) “My husband and I divide the kids up and sit as far apart as we possibly can,” she says. “This eliminates the inevitable fighting and jealousy – it keeps the peace for all of us.”

Older children will still need to sleep on night flights, so consider your seating carefully.  “If you are given the option of a bassinet seat, remember the seat armrests in these rows generally don’t lift up, so they won’t be able to stretch out,” advises Carrie Bradley.

Entertainment wise, look no further than an iPad. Pre-loaded with movies, e-books and games, it’s a powerful entertainment tool which I’d have killed for as a kid. Hand-held games consoles are equally valuable. Make sure whatever you take is fully charged before the flight, and switch it to “airplane” mode, if available, to save its battery. Some aircraft also have USB ports which you can use to charge electronic items on the go. Be aware, however, that you may not be allowed to use electronic devices during takeoff and landing.

And finally, remember that airports are big, exciting places, and it’s very tempting for older children to run off and explore. “I always carry a wallet size picture of the boys with me in case we get separated” says Melissa Tantibanchachai, who lives in Doha with her two boys, who are 6 and 2. “That way I can hand over a picture right away.”

“When we all fly together, my husband wonders what it is I find so hard” says Marianne Makdisi. “But, somehow, when it’s just me and the kids, all manner of things go wrong.”

There’s no doubt that travelling as a lone parent offers up some specific challenges. When your children are unable to walk long distances, for example, the journey from the aircraft to baggage reclaim (where you will generally be able to get your stroller back) can seem insurmountable. Many parents recommend investing in a sling or a hip seat so that you have your hands free to carry bags.

Tessa Meares has a useful check-list of solo-friendly tips: “Pack a main changing bag, plus a smaller one to take for nappy changes – it’s easier to handle; wait until your child is asleep to have your meal; ask for help if you need it; and make friends with other parents on the aircraft,” she says.

And she has one final tip which I think works as a mantra for every stressed-out parent trapped in a tin can thousands of feet above the earth for hours on end. “Keep smiling” she says. “It’s not forever!”

This site uses Akismet to reduce spam. Learn how your comment data is processed.